Negative: DW, UPI, IRIN, everyone who quotes the ‘Friends’.

Most major internationals, like the Guardian and the Economist, went for reporting on the letter from the ‘Friends’, who seem to be trying to stage an intervention (original letter here).  I would recommend reading to the bottom of the Economist, just for the  mental picture of a nightmare bistro dinner conversation, among people who call themselves ’emperor’ apparently in semi-seriousness.

END_OF_DOCUMENT_TOKEN_TO_BE_REPLACED

The international news world deals irregularly with South Sudan at the best of times, but every year for three years now, the opinion pieces flood in to mark the anniversary of independence in 2011.  It’s somewhat like receiving end-of-year reports from school.  So, I have gone through this year’s pre-anniversary selection, and summarised their views for you, in the spirit of helpfulness.

And a tally of ‘key issues’ noted:

New post on Focus on the Horn: Independence Day in Juba 2012

I have a new guest post on the Oxford University Horn of Africa blog – go here.

Garang's statue - ready to be unveiled

I’m currently working my way through an essay based on the ‘academic’ publishing of Southern Sudanese ‘intellectuals’ – including, obviously, John Garang.

Reading through his published speeches, pamphlets, letters and essays, I’ve been thinking again about how his political ideas, most specifically his idea of a national, democratic ‘New Sudan’, has been deleted: his quotes edited, speeches deleted, and political aims rewritten.

I’ve no strong feelings about this: Garang was a difficult man and easily criticised, and his political vision(s) contained a good few inconsistencies, were often hazy about their practical application, and were not necessarily reflective of popular opinions.

The one very useful statement Garang made has been quoted everywhere:

No matter that, earlier in this speech, Garang was talking about the primary need for a ‘New Sudan’, and hopes for unity.  His statement about ‘second class citizens’ is a widely used phrase, and the more Garang is selectively quoted, the more he’s rehabilitated as the godfather of South Sudan and the leader of the fight for independence. 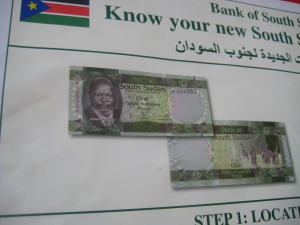 Although it was Salva Kiir’s face that was everywhere during Independence Day – including on a huge poster that entirely covered the side of the new airport building – Garang’s face is on apparently all the new notes in the first run of South Sudanese currency; probably because he’s a dead martyr rather than a living president.

Everyone wanted independence: history in this historic moment

Being a history student here in Juba is highly appropriate at the moment. The phrase ‘historic moment’ is being happily overused across the international press, and people in the bus yesterday morning were talking about a ‘new history’ for South Sudan.

END_OF_DOCUMENT_TOKEN_TO_BE_REPLACED

An Independent Republic of South Sudan

Elf mabrouk to the newest country in the world!

I’ve been in Juba for the celebrations, coming up from Kampala on a bus packed to the roof with returning Southerners travelling from Nairobi. Passports of all colours – predominantly USA blue – were produced at the border, but everyone was excited about becoming, finally, South Sudanese.

The week has been relatively tense in Juba, as concrete and tarmac sets slowly in the baking heat, huge numbers of police and soldiers set up road blocks and machine-gun posts all over town in four rings of security, and public transport shut down. Several arrests of foreign journalists meant I persuaded the Ministry of Information to give me a press pass to try to avoid problems with photography.

END_OF_DOCUMENT_TOKEN_TO_BE_REPLACED

History in a historic moment 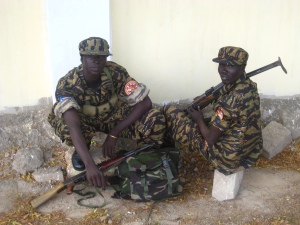 I’m in Juba, and busy being sweaty, sunburnt, excited and organising work.  So many references to history here, I feel right introducing myself as a history student. 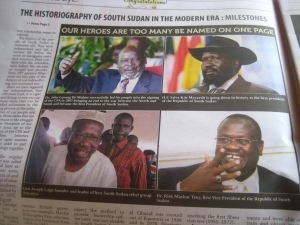 the Gazette's front page story focuses on the "historiography" of independence